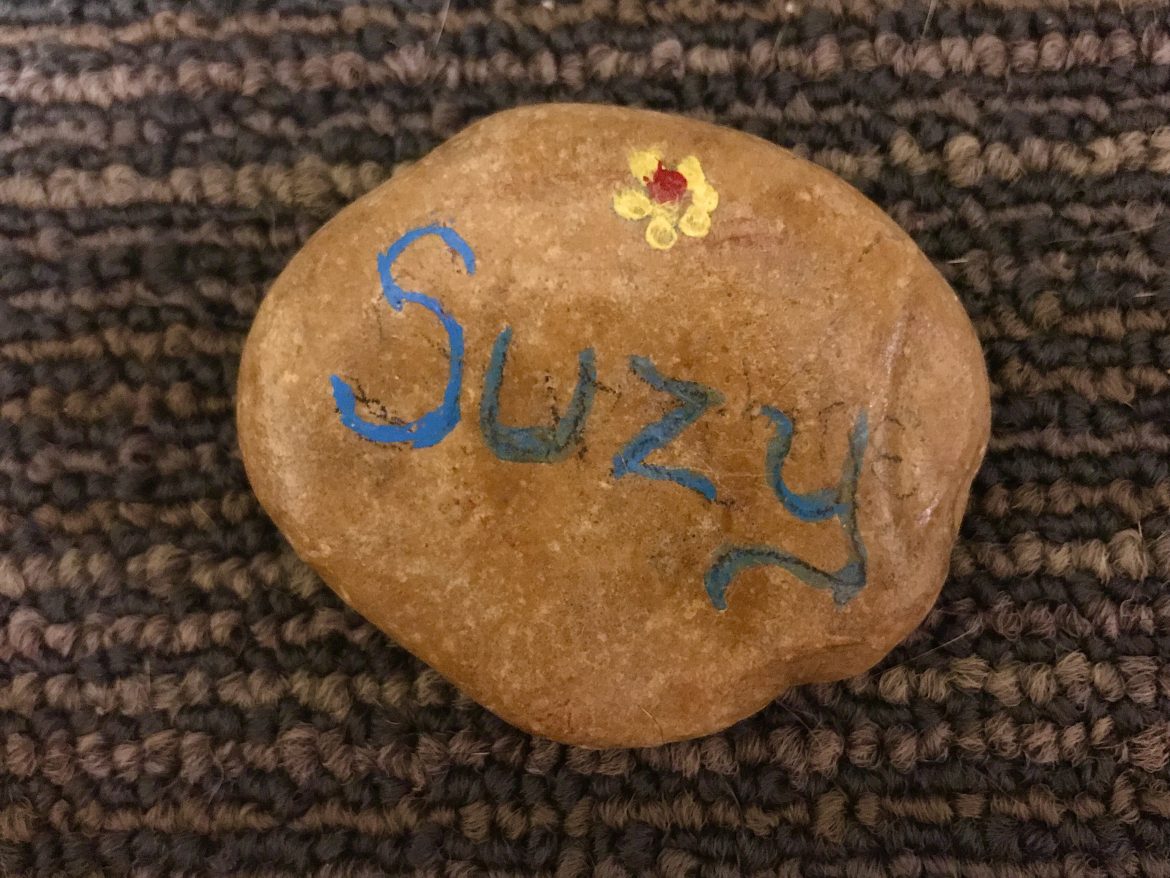 Do you have a nickname? Some nicknames follow given names, like Suzy from Suzanne, but I’m talking about pet names given by people who love us.

My mother bestowed two nicknames on me. One is too embarrassing to share, the other doesn’t make me blush, but I keep it close also. This second nickname made me feel especially loved, maybe from the way she said it, or because only she used it, or for a reason I can’t define. In any case, I want to protect it.

The calling of the apostles, Peter, James and John, cheers me, because Jesus gives them nicknames too. Peter’s name was actually Simon, but Jesus dubbed him Peter. Jesus calls James and John, Boanerges.

Some scholars see these nicknames as prophetic. Others argue against such meanings. Who can say for sure? Peter sounds like the word for rock or stone. He was a rock, but he was also a tripping stone. He declared that Jesus was the Messiah, the Son of God but afterwards rebuked Jesus for talking about dying. Peter denied Jesus three times, then later preached to thousands about Him.

Many Bible translations equate Boanerges with Sons of Thunder. Strong’s Concordance makes it sound more like Children of Commotion, or Children of Violent Anger/Rage. James and John sound like “sons of commotion” when they offer to call down fire from heaven on a village. They also boldly asked to sit on either side of Jesus in His kingdom. When He implied the future would be difficult, they said they could handle it. Later, however, the raucous trouble-maker, John, would not name himself in the gospel he wrote. We don’t find his name in New Testament letters written by other apostles either. For a son of thunder, John became very quiet. Biblical books he wrote speak deep, theological messages and frequently revolve around love, though Revelation rumbles with thunder and quakes.

In any case, Jesus gave his friends nicknames, and I find that heart warming. I imagine Jesus saying, “I’m calling you Peter,” as He throws an arm around Simon’s shoulders and they set off on the road. And can’t you see two brothers jumping out of their boat, jostling each other as they splash toward Jesus? “Well, here comes the Sons of Thunder,” I hear Jesus say. These glimpses of Him make Jesus so approachable, so human. Affection and a bonding surely infused those nicknames, for these three were Jesus’ closest friends whom He called away from the other disciples more than once.

In Revelation, we’re told that each believer will be given a stone with a name written on it, one which no one except He and the believer will know. This may be symbolic for our belonging to Him, but I also hope they are literal names.

I’d like to hear affection and humor in Jesus’ voice in giving me my very own nickname, one that captures my unique personality after it’s all shined up in Heaven. Like my mom’s special nickname for me, only He and I share will share it, and the bond behind it would be worth protecting.

*The photo is of a project in summer camp when I was a child.

Lots to look forward to in our future!

You know I love this and I had no idea about the stone with our name on it! WOOOHOOO!

God comes up with all the good ideas. 🙂

I think we all have nicknames given us by others and for different reasons. I am sure that we will be appropriately named when we get to heaven and one that is precious to God.

He know better than anyone, including ourselves, the most appropriate and the most precious nickname for us, just as you say, Kathy.

I didn’t know about the stone either! What an endearing thought. And how precious that you still have a stone from summer camp when you were a girl. Thank you for sharing.

Revelation 2:17 He who has an ear, let him hear what the Spirit says to the churches. To the one who conquers I will give some of the hidden manna, and I will give him a white stone, with a new name written on the stone that no one knows except the one who receives it.’ As I said, I’m not sure if this is a metaphorical or literal stone with name, but I hope it’s literal. Can you believe I hung on to that camp craft! Did you ever paint rocks when you were a child?