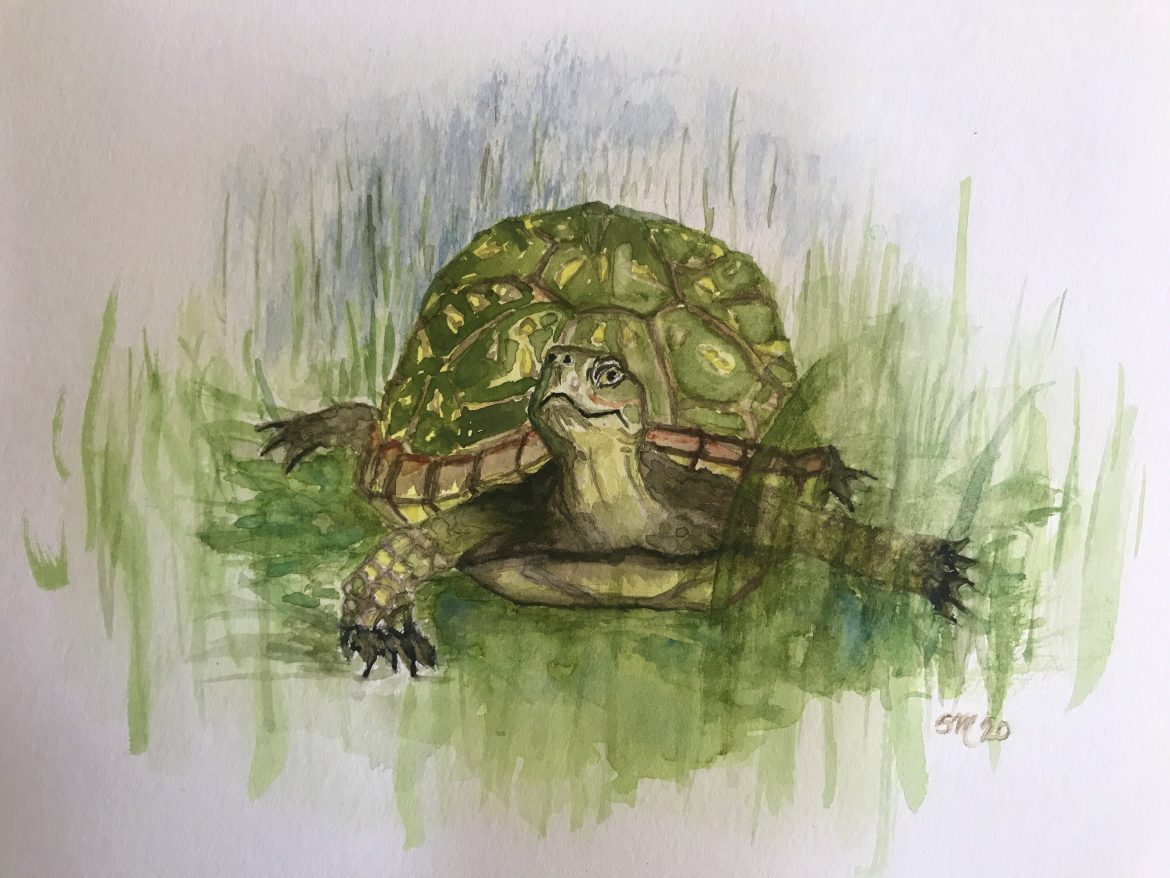 You’ll never believe what lay on my doorstep this morning. I might have stepped on her if not for the contrasting yellows and greens that she wore.  It was Tina Turtle.

Tina Turtle visits once or twice a year. She bushwhacks through the grass and bushes with lumbering steps. Last year she stretched her neck farther than I thought possible to reach a bell pepper dangling in the garden. Half an hour later, a half squashed pepper discarded between the blades of grass was all the evidence that she had been there. She was gone until she showed up again today.

Since it happens so rarely, Tina Turtle’s appearance is always a surprise but never as surprising as seeing her at the door’s threshold, as if she were coming for a visit. I  studied her surreptitiously, not wanting her to retreat into her shell. Her legs bent in a curve more than in a hinge, like our knees, and her shell was decorated in geometric patterns with splashes of yellow. Her little house seemed taller than I last remembered.   I carried the laundry basket into the backyard and pinned clothes to the line, which was my reason for opening the door in the first place. When I returned to the porch, Tina T. was already out of sight. I searched the flower beds and under hedges, but she was hidden or gone. The  aunexpected rarity and briefness of her visits add to the delightfulness of her presence.

This spring I also spied a lizard, not the green anole that is so common, but a brown lizard that resembled a miniature dinosaur. I was not exactly warmed to see him but intrigued nevertheless. He scrambled a few inches, stopped and appeared to do push ups. Then a pink bubble grew from below his chin, a dewlap, which is a tell-tale sign of a male. Tiny scales covered his entire body. His belly resembled a bead purse with rounder and smaller scales tightly knit together. The scales on his back and sides formed ridges which extended down his tail. 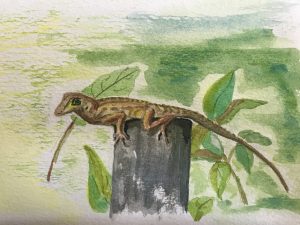 Signs of wildlife always bring me a measure of fascination and joy, and the lizard brought his own variety. That is, until six or seven brown lizards skittered across my path to the mailbox, and again on the back porch when dozens of baby lizards clung to bricks, scuttled on the concrete and vibrated on the rose bush. A chill ran up my back. I’ve never seen so many lizards at once. Each passing day they seemed to multiply exponentially.

Why would one lizard be wondrous while a couple of dozen creep me out? Would I feel the same if I saw ten Tina Turtles trundling across the yard? I probably would. I remember entering a man’s house and being confronted by the eyes of dozens of cats on couches, cabinets, carpets and counters. My body still shivers at the memory, yet I adore my single cat.

Why does rarity give value when plenty cheapens and sometimes vilifies? This applies to shells on the beach,  abundance of sparrows and even to people. It’s only when an individual lizard, shell or person is examined and known in detail that they are appreciated. I don’t see a lizard’s merits in the midst of dozens of offspring or the person in a crowd until I see them one at a time, like Tina Turtle on my doorstep.

Hmmm, I wonder?  Who might I be missing on my doorstep now?

By the way, help me name the lizard. What do you think? Larry Lizard? Leroy? Lizard Skynyrd? Something else?

Beautiful thought (and painting !). May God help me pause and explore the one of each individual. Thanks for the reminder, Suzy

Thank you for inviting us into your world and for sharing with us the joy of finding and studying these beautiful creatures. I never thought of what a blessing it is that these encounters are given to us only in small quantities and how that heightens the treasure and pleasure of them. Thank you for sharing those powerful insights and the related applications to other areas of our lives. (Did you take Tina’s picture to use as a model for your painting? You did a phenomenal job on both paintings.)

On another note, I loved hearing about you and your laundry basket headed out the back door at that particular moment which led to your finding Tina at your doorstep. My 2020 Mother’s Day present was a hand-constructed clothes line. I don’t currently use it for drying everyday laundry but I enjoy using it for drying linens. Thought you might enjoy this article from our Sunday (9/6/20) newspaper about how outdoor clothes drying is much more common in Europe.
“Europe on Monday: Laundry Celebrations”
https://www.montgomeryadvertiser.com/story/news/local/blogs/2020/08/30/europe-monday-laundry-celebrations/5675972002/

Thank you for the article, Lee Ann. I wonder how Europeans get away with washing one day a week?! I hang clothes on the line mainly to conserve energy and to further discourage microbes through sunlight. Like the Europeans, I enjoy the bright colors waving in the breeze like a celebration.
I have taken photos of Tina and of Tiny Turtle, who happened to appear yesterday (!). Tiny thrilled me, of course, playing hide and seek between two flowerpots. You would have clapped your hands together to have seen it.

I SO look forward to these blog lessons! Thank you. My flower-bed critter is green with a BLUE tail. And I love the Lizard Skynard name…gets MY vote.

Ooooh. I’d like to see your critter! And, thanks for the vote. So far, Lizard Skynyrd is winning!

The paintings are a wonderful illustrations for your insightful story. I do love the geese that fly overhead and only get to see them once, or maybe twice each season. I usually hear them first and then look search for them so high up in the sky that they almost look like quilt stitches. What a lovely idea to think that seeing these creatures so seldom is one of the things that makes those encounters so special. We have something called an alligator lizard that sounds like it might be your recent visitors. I love that you hang your laundry on a clothesline. Thanks for this!

Denise, I love your description of the geese like quilt stitches. One can always hear the geese before seeing them, and it’s fun to scan the heavens with shaded eyes until the birds are spotted. Thank you for reminding me of them. We don’t see them here as frequently as we did in Texas. I miss their announcement of a new or fading season.

Being able to watch a squirrel in the tree outside my window always makes me happy because it is so playful. Even the birds that roost in that tree seem to enjoy hopping from branch to branch, sometimes landing on the same branch a number of times. The small dove that walks in my flower bed and sometimes sit on the coolness of my porch seems to have a purpose for being there and maybe it is the cool cement or maybe the bird bath. All of them seem to love the bird bath and I enjoy watching them. They remind me of myself, being alone with peace and quiet and enjoying it. The sun shine through the branches of this tree and reminds me of the light I have in my own life and how precious each day is. Being alone can cause loneliness, only if you allow it. I am never alone and I love my little friends that visit every day. God bless them all.

It seems that Tina Turtle has a pleasant, almost smiling look on her face. Thank you for drawing her in all her beauty. I am so glad you have this little creature to enjoy.

She does seem to have a smile, and that’s how she makes me feel. I am glad I can enjoy her too. Now I’m doubly glad, because Tiny Turtle appeared on Tuesday. I hadn’t seen Tiny for more than a year.