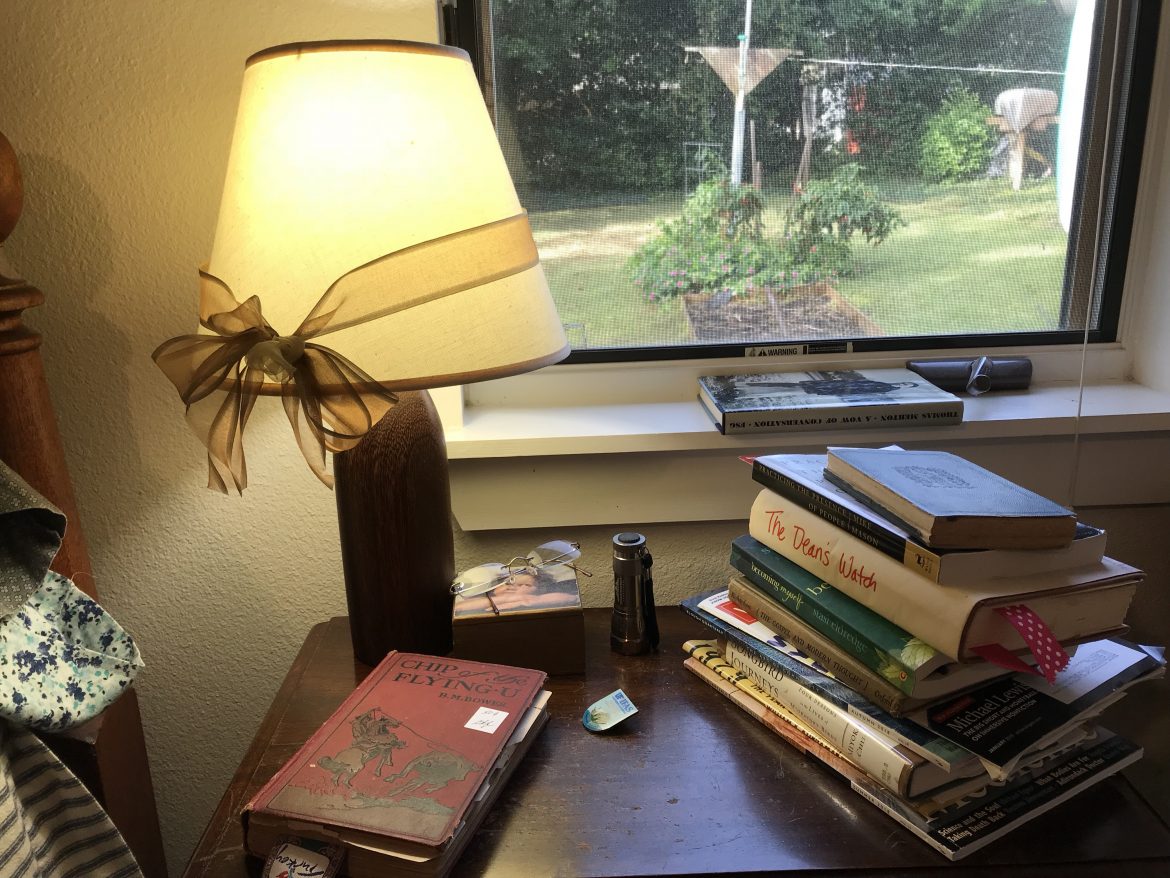 My bedside table speaks volumes. The books discussed below stand on my bookshelf as mentors overlooking and nudging my growth and wonder of life. They each have underlined sentences or bracketed paragraphs with notes I’ve written. You may want to add one or some of them to your Christmas list or to someone else’s list.

God answered my prayer through Grace Works. I was in a prolonged slump and knew I needed to do something about it, so I drove to the Christian Bookstore.

LORD, You know how empty, tired and dull I feel. Please help.”

After fruitless browsing for inspirational titles, I turned to leave empty-handed, but as I passed by the clearance table, a book caught my eye. Good books don’t land on the clearance table, I told myself, but picked up the book that took my notice anyway and read the introduction. Something stirred inside, and I bought it.

Grace Works reinvigorated my spiritual life, and thus my physical life. The theme in the first chapter is “hardening of the ‘oughteries,’” or “keeping the rules and missing the party.” If that doesn’t lift your eyebrows, then skip this one.

The Man Who Mistook His Wife for a Hat: and Other Clinical Tales by Oliver Sacks

This book is like gumbo, rich and fascinating with facts, but also with medical bits I couldn’t quite chew. I picked those out like okra and slurped the rest.

Dr. Sacks was a clinical neurologist and wrote of his most interesting cases involving illness or injury affecting the brain in astounding ways. To whet your appetite, one patient experienced a heightened sense of smell comparable to that of a dog. He could distinguish people and their emotions by smell.

He could recognize every street, every shop, by smell—he could find his way around New York, infallibly, by smell.”

As I read intriguing case after case, I bemoaned that, while my father with Parkinson’s and my mother-in-law with dementia were alive, I hadn’t known about this book with Dr. Sack’s tricks to connect with people who’s mental state was compromises.

Practicing the Presence of People by Mike Mason

Mike Mason is my current favorite Christian non-fiction author. My pencil graffitied most pages in this book, because he speaks profoundly about age-old ideas. Some of his statements elicit from me an argument in the margins, but often I concede by the end of the chapter. The book challenges and encourages, but reads like a cheesecake is eaten, one half-forkful at a time allowed to melt on the tongue before swallowing. This book cannot be eaten, sorry—read, at a few sittings, it’s a long-term bedside table resident. Here’s three tasty treats.

Looking for the whys of belief instead of the whats helps us to love people rather than to judge them.”

Relationships—even bad ones— speak loudly and clearly. Listen to them. They will tell you the truth about yourself.”

A City of Bells by Elizabeth Goudge

Elizabeth Goudge is my favorite fiction author. I laugh out loud when her tongue-in-cheek humor pops up, and I re-read passages for their shear beauty and insights. Ms. Goudge, born in 1900 in Britain, was the only child of an invalid mother and an Anglican priest who was a Divinity professor at Oxford. Often left on her own, she observed with astuteness and her imagination took over. Her writing captures characters and the created world with descriptions that bring her subjects to life through a special ability to turn a phrase just so.

This quote catches the main character, Jocelyn, while he is shaving.

He was immersed in white lather when there was a sudden pattering of bare feel outside his door, which burst open with no preliminary knock to admit a small boy with freckles and flaming red hair. He cast one glance at Jocelyn and dashed out again, leaving the door open and shouting at the full force of his lungs, “Come on, Henrietta, he’s shaving!”

Before Jocelyn had time to draw breath, Hugh Anthony was back again with Henrietta. They leapt onto his bed with the agility of young rabbits and leant over its foot as though it were the front rail of the dress circle, their eyes bulging and their mouths ajar. Jocelyn realized that, for the first time in his life, he was an exciting entertainment. He flourished his razor and prepared to do his best. While he did it there was no sound but deep, ecstatic breathing, and when he had finished there was a long-drawn sigh of satisfaction.”

Reluctanct Saint: the Life of Francis of Assissi by Donald Spoto

The saint sculpted with birds alighting on him and bunnies scampering about his feet has always intrigued me. This biography of Francis of Assissi by Spoto, describes Francis’ conversion and new life but does not shy from equal disclosure of his extreme asceticism and suffering.

This book achieved my permanent bookshelf status, because the saint’s humility and trust in Christ is demonstrated in a contentment and absolute acceptance of every circumstance. I do not agree with all of his theology, but I cannot argue with his simple and admirable faith in a personal, risen Savior.

Francis did not reject suffering as something undeserved or offensive, he went though the pain to a consideration of God’s inscrutable and mysterious love. He did not try to intellectualize or theologize, to explain it away or to find a rational means of dealing with suffering. His model in this, as in all things, was Christ his Lord, who abandoned himself to the unimaginable mercy of God—and who was finally vindicated and taken up forever into new life.

In proclaiming the mercy of God—not a common topic in the harsh worldview of medieval piety—Francis was steadfast. Having experienced  divine mercy and pity in his own conversion, he made them the connective threads of the entire fabric of his teaching, from the first day to the last. Thus in a real way, suffering became for Francis a form of uninterrupted prayer, linking him wordlessly and therefore more directly to dependence on God.”

You know, I love me some Mike Mason !

A few of your favorites intrigue. I keep returning to “that incredible Christian” and “the pursuit of God” by AW Tozer.

My stack to read is a bit (way to big) high – it is a wonder they don’t come tumbling down.

If there was time to reread fiction I would read again Milford and father Tim series by Jan Karon. Those folks feel like old family friends

Well, thanks to you, Mike Mason will continue to be a staple for me. I’ve read several of the Mitford series. What’s on top of your pile?

Pure joy, the reading of your blog. With you and Elizabeth Goudge. A biography of St Francis was on my father’s bedside table, and on mine now, it’s cover more stained than before. Totally unfamiliar with the other books you mention, but your comments make me stop what I’m reading right now and go find them

You make me smile, Maria. What’s on your bedside table at the moment, besides the biography? Who wrote the version of St. Francis that you have? I’d love to hear that author’s approach.

I am bouncing around (right now) between Mason’s “Practicing the presence of people”, Smith’s “Marriage Matters” (excellent, heart challenging), your copy of “The Return of the Prodigal Son” and waiting in first position in the queue is Ashley Hales “Finding Holy in the Suburbs”

I recently saw Finding Holy in the Suburbs and thinking another friend recently read and recommended it. I want to hear your thoughts after you’ve dove into that one. I thought about including The Return on the Prodigal Son in the list and decided I will write up a second list later with it. Thanks for sharing your stack.