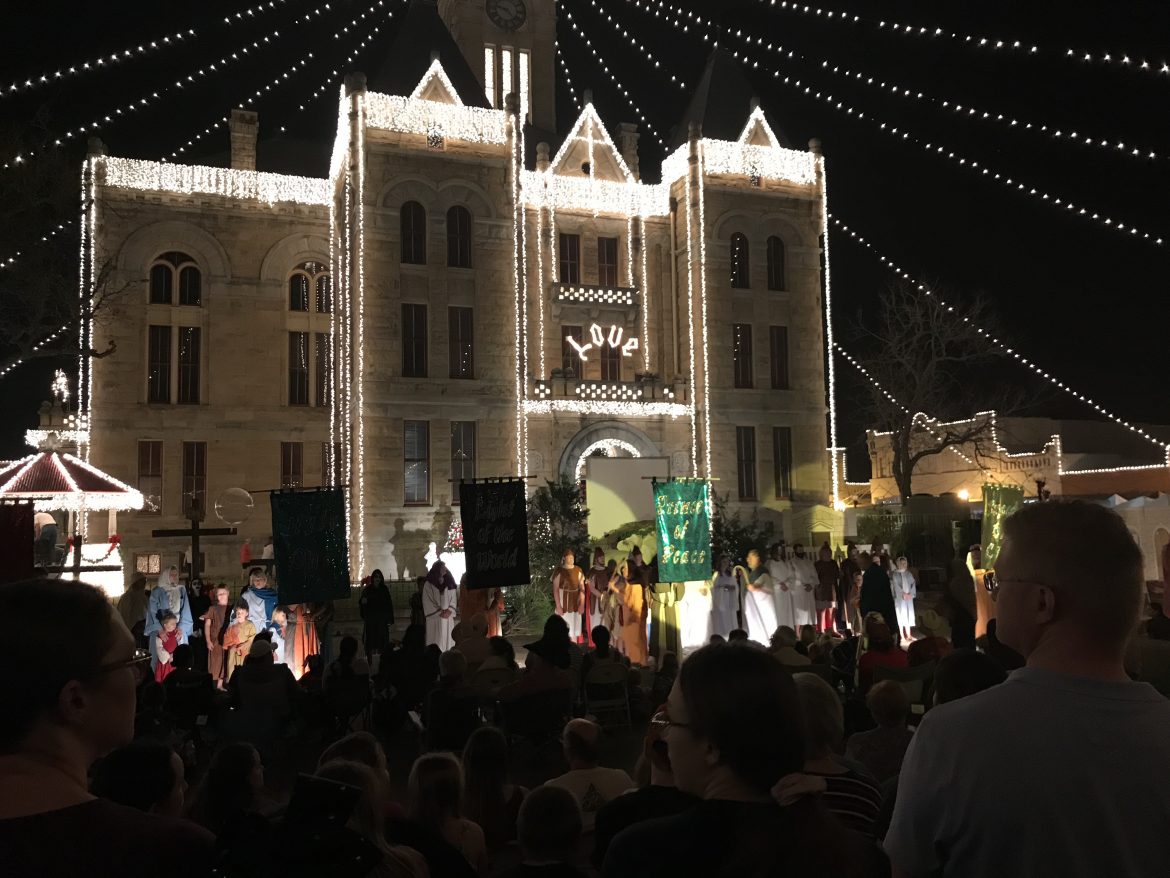 I writhe on the green faux-leather couch. My brother has grabbed one limb, my sister an opposite limb, me, the center of a tug-of war-with siblings at either end pulling, yanking, fighting with each other through my body. The couch’s smooth cover and rigid arms both advance and limit my sliding, this way then that, preventing a decisive win for either side. I, in the end, lose.

A pain sears my arm and disrupts the game. Angers flip to fear, because somebody’s going to get it. Mother marches tiredly in root the bottom of tears and to divine blame. We load into the car and head to  the one doctor in town to determine the damage done. A sprain, just a hairline fracture from pulls in two directions needing nothing more than a brace and wrap. My fingers curl around cool steel as my arm is straightened like a board. It feels like a weapon.

We feel tugs-of-war during Advent. On one side, the excitement of discovering the perfect gift, dazzling lights and music give us a heady rush. We look forward to festivities, family, games and concerts. I rummage for the Christmas table cloth and my mouth waters as I consider baking something special like kolaches or pumpkin bread. This is right, I should be joyous. I should celebrate the miraculous birth of a baby. God in the flesh has come here, and his glorious return awaits, my inheritance bides on the horizon. To not rejoice would be an affront considering the amazing gifts I’ve already opened in Christ and the ones anticipated.

On the other side of the tug-of-war rope, we feel the pull of voids and things gone wrong. Instead of friends clinking glasses, parents taking photos, and children rolling around in wrapping paper, the season mocks us like melting wax dripping on us, weighing and searing. Silent ghosts of dead hopes and people hover, and their pall makes colors and carols seem too bright, like ads for cars and platters of food. The babe in the manger entered the world in a homeless camp, after all, and his life was threatened, forcing his awkward parents snatch the child and flee to Egypt. Grown Immanuel walked on dirt and cried like we do.

I’m feeling fractured. Joy and sadness, they both pull, and pull hard. Which way will it go? Reconciliation of two enemies? The two sides will not be satisfied until His final appearing. Meanwhile, I engage in what’s before me, whether that’s to embrace the sadness of those who are too far literally and figuratively to sit across the table or to strip the house of her every-day dress and pull out her party clothes. I need to do both, to shop for presents and to hand out a fast-food gift card to the grimy guy on the corner, though I’m not sure if he’s needy or just advertising so. Does it matter? Am I the arbiter of the rope’s tug?  I will pendulum back and forth and leave the winning to God.

Ouch! Your description of being the “rope” in a tug of war game with siblings is vivid. I had not thought of the advent season as one of tugging, but you are right. It is! After losing Dad last year in November, Christmas 2018 was a blur. I remember very little about it except that I asked Tim to take over the family traditions. This year, I’m mindful of loved ones who have passed, but am stronger. May the Lord give each of us wisdom as the countdown to Christmas pulls our attention away from the babe in the manger. May He be foremost in our hearts and may we respond to life’s demands with His wisdom. Thank you for your thoughtful article.

Mindful of those past and those in our present, I want to (have to) embrace them both. Learn from and give thanks for the good parts of the past and clasp hands with those present to make the most of the moment. Thank God for the Babe for when I fall short.

Thank you, Suzy. Such a poignant description of the complicated and contrasting emotions of the season.

Yes, it’s complicated and we seem to experience the conflict most during the Christmas season when all our senses are heightened, but this tug-of-war exists year round, doesn’t it?! The back and forth keeps us hanging on to our Father.

This message accurately describes so many of us. I, for one, feel this tug of war going on in my life so many times and I have to
decide what to do. It seems like I always find the right answer when I turn to God and wait for His answer. The bumps in the road of life are just little obstacles placed there by God to see how I will handle this tug of war in a world where so many have seemed to forget the real reason we are here and why this season is so important and so special. I believe that I have handled those time in a way that glorifies God. I need these reminders to remain close to the Almighty Lord and Savior. Thank so much for bringing me back to the reality of what matters most when I tend to stray. You are a blessing to me, Suzy!!

Your comment reminds me of a quote I heard a week or two ago by Ladysmith Black Mambazo, “After traveling the whole world, I still come to the same truth that I left at home: God is truth!” We must always come back to God, even without answers.