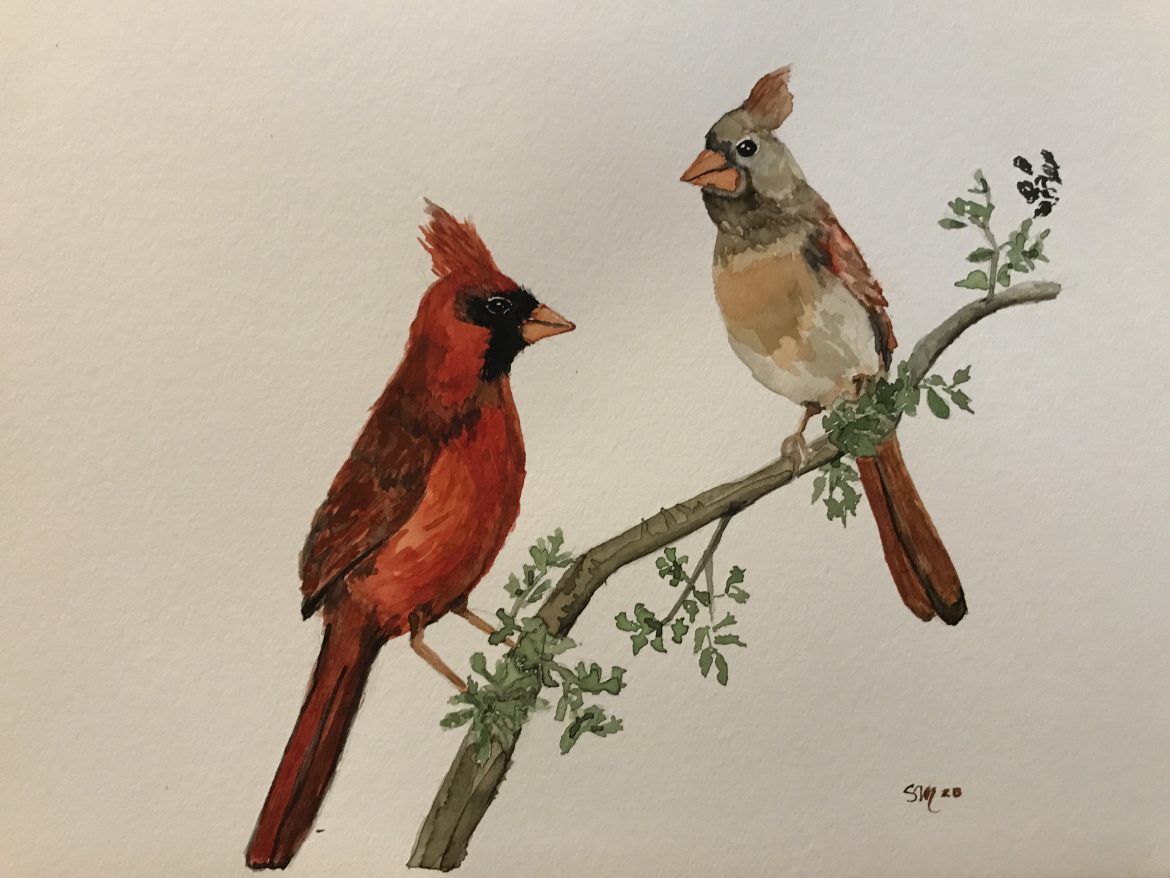 I scanned the tree branches searching for the bird with its unmistakeable calls. Ah, there he is, so easy to spot with bright red plumage. Cardinals make me feel satisfied, because they’re the one bird I can always identify.

I call him, Mr. Cardinal, and he reminds me of a creature suitable for Downton Abbey. His crest gives him an air of importance like a top hat. The black mask he wears contrasts pleasingly with the red, and he wears it like a British gentleman lost from a masquerade party looking for his wife.

Mrs. Cardinal, likewise, fills her sophisticated, if old-fashioned, role. She fusses over the nest, responsible for its construction and tidiness. Her garb of elegant feathers blend hints of tan, orange, rust, gray and sand. She’s not nearly as showy as her counterpart, which makes me respect her all the more. She tends the eggs while her husband flies from the nest to hunt, and returns to wait upon her with his catches. These two birds live respectable, monogamous lives. Each has an important job and relies on the other to do their part. Mr. Cardinal’s seems more glamorous, but it was he whom I saw squawking in the clutches of a crow.

The birdbath is situated a few yards from our breakfast table’s window.  There, the pair of birds take turns watching for predators and bathing with dips and flutters. They always delight me with their antics and grant me a feeling of wholeness. They’re altogether satisfactory.

That is, except for one curious behavior. Mr. Cardinal habitually taps his reflection. He pecks his reflection on my husband’s office window, and I caught him striking a car’s side mirror in a parking lot. Similar tales circulate about him in other settings. At first, this action is humorous, but when repeated, it becomes irritating and alarming. The poor fellow will damage himself and drive us crazy in the process of exorcizing his doppelgänger. Of course, he’s defending his territory, routing unwelcome intruders from his grounds.

I wonder what Mr. Cardinal sees? A frightening, masked threat? A disgusting flirt? What in his reflection alarms or repulses him that he must attack?

Mr. Cardinal, please stop. I am grieved that you peck at something you wrongly perceive. You are an entirely satisfactory bird just as you are, but you’re wasting your efforts in this never-ending loop, while your family needs you elsewhere. Mr. Cardinal, the only way you’re going to be rid of your reflection is to turn and fly away.

I love this story, Suzy, and I learned some things about cardinals and myself. Thank you for sharing. Your painting is beautiful, too.

Thank you, Lee Ann. Have you seen male cardinals make this mistake?

I have seen this with our Mr. Blue Bird. It does give one pause to wonder what they are thinking after several attempts to run themselves away. I am wondering too what Mrs. Blue Bird is thinking as he so bravely protects her from himself.

Your watercolor is lovely too, so glad you are painting!

Bluebirds don’t frequent our yard, so I don’t know their habits. Thanks for letting me know that they fall into this trap too. We humans are not so different either.

Suzy, your picture is gorgeous, as are the cardinals that God created for us. We do have cardinals in our backyard. Harold keeps the feeders full so they can eat all they want. We have other birds come in, but mostly cardinals. I get lost watching them. They are delightful.