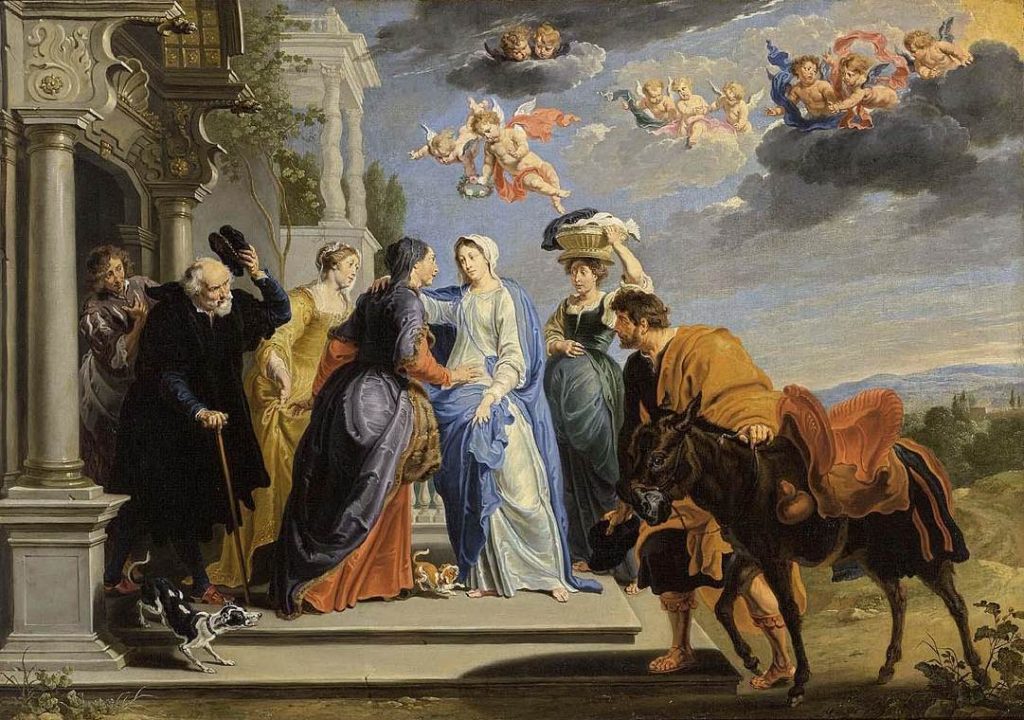 God demonstrates in the Christmas story that he works everything in accordance with his plan for the world, and at the same time, coordinates his plans so that everything works for our individual hope and future. He’s ambidextrous.

Remember the message that God transformed Zechariah’s doubt and resulting muteness into a means of assuring Zechariah of God’s promises about a son? At the same time, Zechariah’s muteness became a means of establishing authority to John’s identity when he was born.

Zechariah and Elizabeth were “advanced in years.” God timed their son’s birth to be near Jesus’ birth, because John’s mission was to prepare the way for his cousin’s ministry. This timing benefitted the world and was also God’s tender gift to Elizabeth and Mary.

Despite Elizabeth’s age, pregnancy was as novel to her as to a teen, yet who of her peers could she give and take excitement of a coming baby? How did her peers view her pregnancy at her stage in life? Did they believe Zechariah’s story that John would be filled with the Holy Spirit in the womb and would be great before the Lord?

Mary’s unwedded pregnancy occurred in an era that punished such situations with stoning. With whom could she confide her extravagant story and not be ridiculed but believed? Who would explain to Mary the changes in her body and giving birth?

“In those days Mary arose and went with haste into the hill country, to a town in Judah, and she entered the house of Zechariah and greeted Elizabeth.” (Luke 1:39, 40)

How quickly Mary left from the angel’s visitation to go see her cousin.

“And when Elizabeth heard the greeting of Mary, the baby leaped in her womb. And Elizabeth was filled with the Holy Spirit, and she exclaimed with a loud cry, ‘Blessed are you among women, and blessed is the fruit of your womb! And why is this granted to me that the mother of my Lord should come to me? For behold, when the sound of your greeting came to my ears, the baby in my womb leaped for joy. And blessed is she who believed that there would be a fulfillment of what was spoken to her from the Lord.’ ” (Luke 1:41-45)

Hear the joy in Elizabeth’s voice? Imagine their embrace at their greeting. It was not a brushing of cheeks.

Elizabeth’s pregnancy was six months along when Mary reached her, and Mary stayed three months. God’s planning gave Mary the opportunity to witness pregnancy until its culmination in birth, a gift that she would need in a few months time when she gave birth without family’s support.

These two women needed affirmation and to share their wonder with each other. God’s timing of Zechariah’s answered prayer included the moment when John, still in Elizabeth’s womb, leapt for joy in the presence of his savior, Jesus, in Mary’s womb. What excitement and comfort these two women shared despite the decades difference in their ages.

Mary’s jubilance of God’s goodness to her so swelled that she composed a song on the spot.

“And Mary said, ‘My soul magnifies the Lord, and my spirit rejoices in God my Savior, for he has looked on the humble estate of his servant. For behold, from now on all generations will call me blessed; for he who is mighty has done great things for me, and holy is his name.’ ”(Luke 1:46-49)

Mary didn’t have trouble recognizing God using both hands to work for good for her and for a nation.

Are you tempted to believe that God’s plans are either/or—either good for you or good for the whole body of Christ? His power extends in both directions, micro and macro. He’s not only ambidextrous, he has microscopic and telescopic vision. What a God we have!