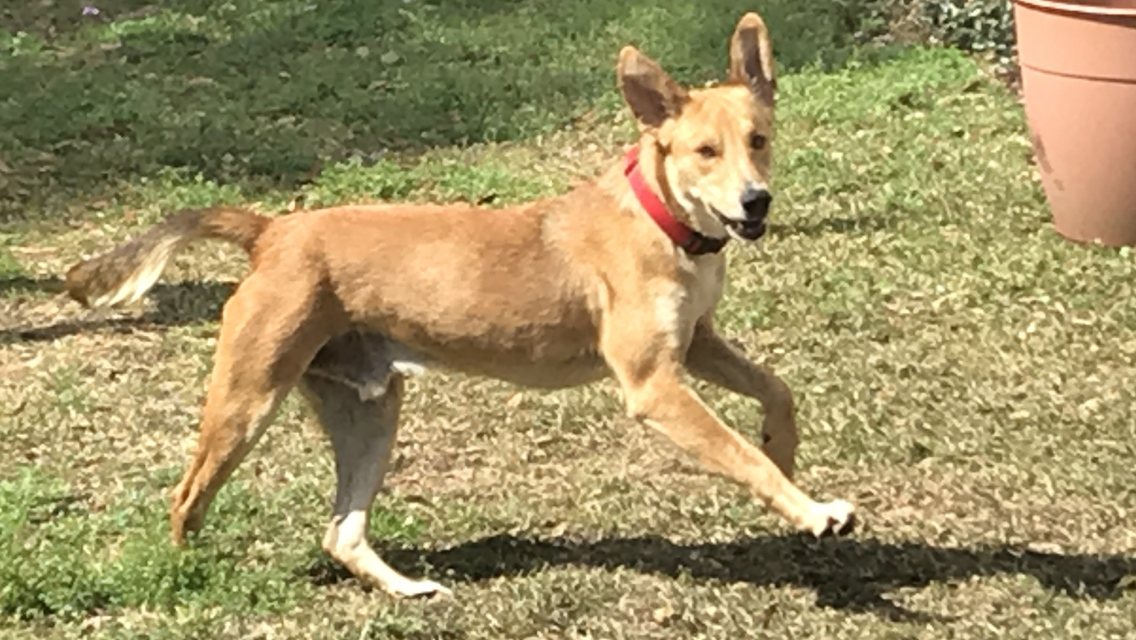 I shuffle papers until motion out the windows draws my attention. Our new dog, Diggity, races alone around the yard like a rodeo dog. He scoops up a toy mid-gallop and tosses it in the air, then circles around at top speed to nab it again and carry it to an imaginary finish line, where he plops on the ground heaving and rolling around squeaking his toy.

I feel the weight of chores but can’t resist his contagious elation. I push back from the table and join him outside to ruffle his ears and throw his bone to retrieve. He grins and beats his tail with enthusiasm. As happy as he is, it is nothing compared to his greeting at my return from an errand. At those times, he does the Diggity Dance. He prances back and forth on his front feet while the other half of his body does the twist, wiggling back and forth so fast and hard it seems he could crack in half. All the time he dances, he gargles a happy, little, Diggity ditty.

Diggity didn’t behave with such abandon when we first brought him home. He scrunched his long body into a ball shape making him seem a smaller dog. He jumped back and avoided us if we approached him too quickly or loudly, and retreated with his tail down when men came near.  When we spoke to him in baby-talk, his tail swung in slow, shallow wags, and when I threw tennis balls, he stood still and watched them land in the grass. We gave him time to learn to trust us before starting leash training. Still, he began by pulling away from the tether and by planting his feet, refusing to move or shying from every car, dog, post, or pinecone. We did not drag him but coaxed him with treats and cooing to discover the wonders of walks through the neighborhood. 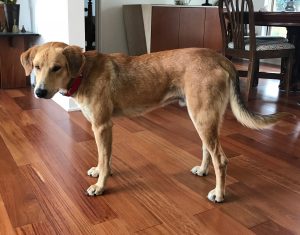 We understood his insecurities, knowing a sketch of his history. Talking in enthusiastic, high-pitched voices we encouraged him when we approached with “Good boy, Diggity,” until he knew his name. He learned not to fear strange sights and sounds but that he was safe with us. He now perks up with anticipation of walks and, on our way, sniffs and trots with confidence. After Mike’s feeding Diggity morning and night and patiently interacting with him, Diggity backs away less from men, and not at all with Mike. Frequent scratching and stroking his chest and head, sleeping in his very own bed, and lots and lots of play and treats reassure Diggity of our good intentions. He has learned that we provide for him, enjoy him, love him, and over time, that our home is his forever home.

Diggity has learned a lot from us, but I recognize that I also am learning from our silly, wonderful dog. Our situations are not that different.

Sweet joy! Love your new Diggity. Reminds me of our Maggie’s first weeks from rescue! The story remains constant – compelling love rescues us all.

Thanks, Natalie. Funny that I awoke thinking of you this morning. It must have been that our mutual friend, Linda, said she would be talking with you soon.Happy Trails!