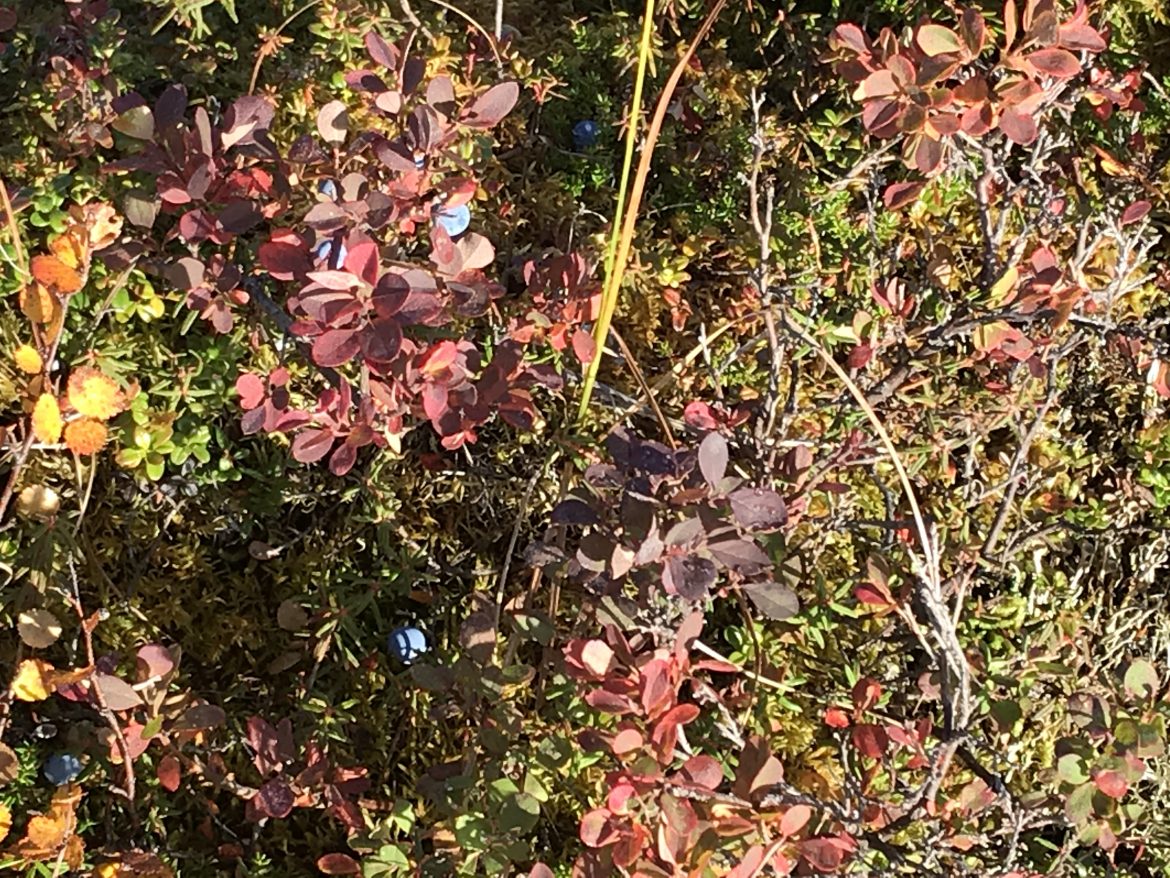 Six hikers collapsed on the tundra. Throughout our foray winding up the mountain on switchbacks through boreal forests, munching lunch on a summit, then knee-jarring our way back down, I repeated every fact our guide, Ryan, described. He introduced us to plants and animals as he would old acquaintances, giving their names accompanied by anecdotes like their taste or use, or which animal preferred which berry on its plate. Names, edible or not, birds, tracks, scat, and seasonal changes, I tried to mentally file every morsel.

I began well in the tundra, thrilled with the mosaic of five inch tall blueberry bushes with maroon leaves, next to green moss-like plants with shiny black crowberries, nestled with ruby and scarlet cranberry, lingonberry, and patches of bearberry. I identified and tasted them all, even soapberry, juniper berry, and pumpkin-colored cloud berry. Dwarf willow, brighter than sunflowers, and fireweed, colored as named, enlivened the landscape beyond imagination. All this variety squeezed in a square yard at my feet. As our hike progressed, though, the facts tangled and faded like a dream. I tried restringing them, but by the time we arrived back for our wrap-up, my mind was as empty as a balloon. The facts had disintegrated.

We rested in a semi-circle facing Ryan. He rearranged his legs on the springy vegetation.

“Traditionally after hikes, we each describe our highlight of the outing. I’ll go first.” He fingered a sprig of labrador tea, a fragrant evergreen, while gathering his thoughts.

“Thank you for sharing your hike with me. This is my last one. The animals are leaving with the winter looming around the corner, and I am going too.” His voice snagged, and I wondered if he meant a terminal leaving. Then he resumed. “but like the animals, I’ll return next summer. It’s the closing of another cycle in life.”

Relieved that Ryan wasn’t dying, I didn’t hear the rest of his speech, because I sat next in line and panicked at what to say. The plant names fled, and as I lifted my gaze to the surrounding mountains, the distances and heights of the landscape overwhelmed me. I felt hollow and numb, knowing I had missed half of the beauty while trying to remember facts.

“My turn?” Gulp. “I’m impressed by the bounty, the volume of berries, colors, the millions of acres without streetlights, the varieties of lichens and animals.” I embarrassed myself with the brief and disorganized highlight.

I had lost my perspective, caught up in the minutia, and forgotten the big picture. I’m like Martha, scurrying around the kitchen, sweating to prepare a meal for twenty people, when she could be reposing next to Jesus and soaking in his voice. Preoccupied with nuts and bolts, we failed to enjoy the wonder of the bigger picture in front of us.

Another hiker offered his highlight. “I feel so small in the backdrop of the mountains.”

He was right. Though God knows each of us, we occupy a minuscule time and space in the scope of history and future. If I don’t complete all of the tasks on my list today, it won’t matter in the grand scheme of things. It’s okay sometimes to do something mindless, to let the wind mess my hair, or slurp ice cream and not count calories, to drop what’s in my hands and absorb messages my senses detect. The world will not fall apart if I sit down and appreciate the warmth of my cat against my leg or stoop to smell a rose on a walk through the neighborhood. My heart tells me that sometimes, wonder pleases God more than laboring to accomplish. Surely it gives him joy when He and I marvel together at his handiwork.

Now as they went on their way, Jesus entered a village. And a woman named Martha welcomed him into her house. And she had a sister called Mary, who sat at the Lord’s feet and listened to his teaching. But Martha was distracted with much serving. And she went up to him and said, “Lord, do you not care that my sister has left me to serve alone? Tell her then to help me.” But the Lord answered her, “Martha, Martha, you are anxious and troubled about many things, but one thing is necessary. Mary has chosen the good portion, which will not be taken away from her.” Luke 10:38-42