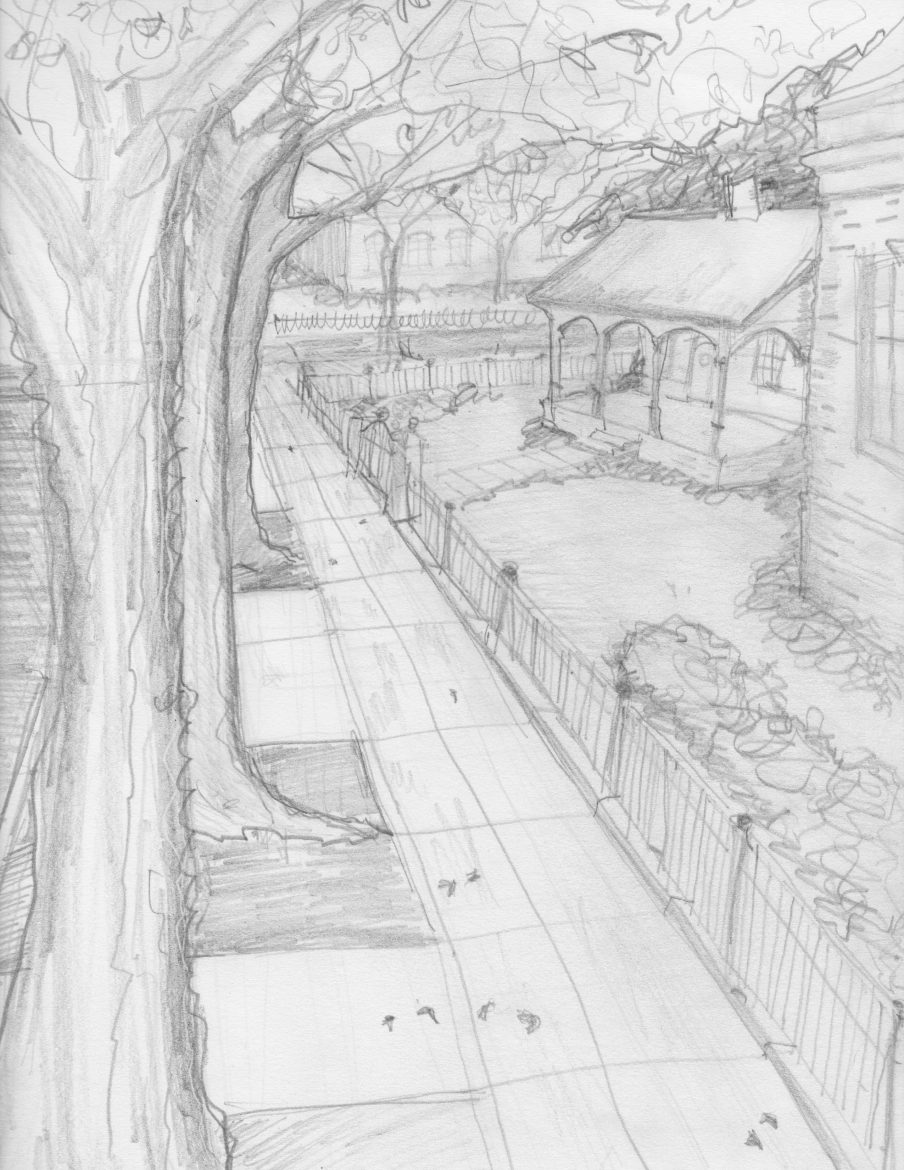 We walked through a historic neighborhood in an unfamiliar city. It was time to return to the hotel, and I knew we should turn right, but my husband headed left. I didn’t say anything, and we arrived back at the hotel without a hitch. We’d still be walking, if we’d gone my way.

My husband sees the big picture, the orientation of city blocks and architectural styles, while I see the details like ivy and ironwork. When driving, I dodge flotsam in the road, but he crunches over them, because I watch the narrow pavement while he enjoys the broad views.

I need to balance both perspectives, far/big picture and near/details, but I often get stuck in the near. On a trip I made a decade ago, my perspective needed correcting.

I huddled in an airplane window seat waiting for take-off. Vibrations rattled through the seat and up my back with the cycles of the engines. Clouds hovered, shrouding the horizon and shrinking the visible world. Heavy with moisture, they wept on the tarmac, while I envisioned what waited for me.

I was flying four states away to visit my cancer-stricken mother and Parkinson’s-handicapped dad. I wondered if this trip would be the last time I would hug my mom. As the plane lifted, droplets fled across the glass in horizontal streaks. Clouds crowded the plane and hid structures and puzzle-piece pastures with opaque gray. I leaned against the window, and closed my eyes.

The plane ascended. The raindrops ceased tapping, and the window warmed. Light shown through my eyelids. I sat up. The sun dazzled above bumpy white clouds like snowy moguls reflecting blinding rays. I held my breath at the beauty, the brightness, and the expanse of sky and light.

The sun had been shining above the gray cloaked ground with a faithful presence, but I couldn’t see it earlier from below. The only aspect that had changed was my perspective. If I had waited long enough, warmth and sunshine radiating above the veil would have been revealed below when the clouds wrung themselves out or moved on, because eventually, they would go.

I thought again about my parents, “One day I will be on the other side of this span of grief on my timeline. The clouds will clear.”

Today, is that day. The grief, which was inflamed out of control, has quieted, though it will accompany me to the end of my timeline. Meanwhile, my perspective has changed, and bright memories appear as often as the clouds.

My perspective corrected again in that town with the historic neighborhood where I would have gotten us lost, if not for my big-picture husband. We travelled to attend a wedding in which our son was a groomsman. A grief weighed me on that trip, and I struggled to push it away. At the wedding, we met a couple who had tragically lost their son three years ago. He had been roommates with the groom and the groomsmen, a “band of warriors.”

The deceased son’s parents went to the wedding to celebrate with their son’s friends. The parents  could focus on the absence of their son and on the fact that they would never see him marry. I would have. When I remarked my admiration to them, the bereft mother responded without hesitation.

“These boys are like sons to us. We wouldn’t dream of not coming. You can’t take them for granted.”

The grief I had been carrying shrunk to proper size. Her perspective focused on what she had, not what she didn’t have. She grasped the present joy of these surrogate sons, knowing the fragility of life. She also alluded to her biological son’s faith and the possibilities for the time yet to come.

Besides the wedding, we also came to see friends from college days. Bob was one of our groomsmen, and we hadn’t seen him in several years. He called recently to let us know that cancer lodged in his body in organs difficult to treat. His doctor allowed him to break from chemotherapy for a few weeks to try an alternative treatment. We did not know what to expect when we greeted him.

Bob and his wife grinned, hugged us and took us to a BBQ cook-off at a train yard. Not only did they entertain us, they brought houseguests they were hosting for the weekend. We strolled  from booth to booth, tasting and storytelling. Bob lingered to talk at every booth, clapping people on the back and making a trail of friends. He and his wife smiled, asked questions and engaged us. To those handing out BBQ, our friends appeared healthy and upbeat.

Bob and his wife focused on people in their presence and on the present. They honed in on the dietetic treatment for cancer which they could control, and left what they could not control to God’s hands. They could see the big picture and the details, but knew not to fixate on one or the other.

The apostle, Peter, had trouble, like me, keeping a proper perspective.

When Jesus told His disciples that He would suffer and die, Peter took Jesus to task for saying such things. In return, Jesus reprimanded Peter.

“You are seeing things merely from a human point of view, not from God’s.”

It’s easy for me to think that God’s point of view is very high and far away from my tiny circle, but that’s me viewing God from a human-size perspective. As far as He extends to the infinite reaches of the universe, He extends down to Earth, to my neighborhood, to deep inside of me. I should not underestimate Him.

When the clouds move in and my soul can’t see, I need to remind myself that the sun is still shining. I need to remember my perspective.

Very appropriate blog for day after Mother’s Day since many mother’s are no longer with us.

Thank you, Karen. We never stop missing our moms no matter how many Mothers’ Days pass.

Suzy, so enjoyed your thoughts! It is so about our perspective and living present.

I remember when I was first married, I was sore afraid “What if I loved him more than I loved Him?” How do I live loving my husband in the right perspective?

So we practice living in the present, cupped in His everpresent hand, forgetting ourselves and finding rest and joy. Seeing/doing/living what is in full view while seeing/resting/breathing from His view. It’s a day by day Sermon on the Mount life.

Our loving all that is around us fully with a loose grip; knowing we are fulling loved with a firm and fixed grip.

You’re so right, Sheryll. I love this, “Our loving all that is around us fully with a loose grip; knowing we are fulling loved with a firm and fixed grip.”