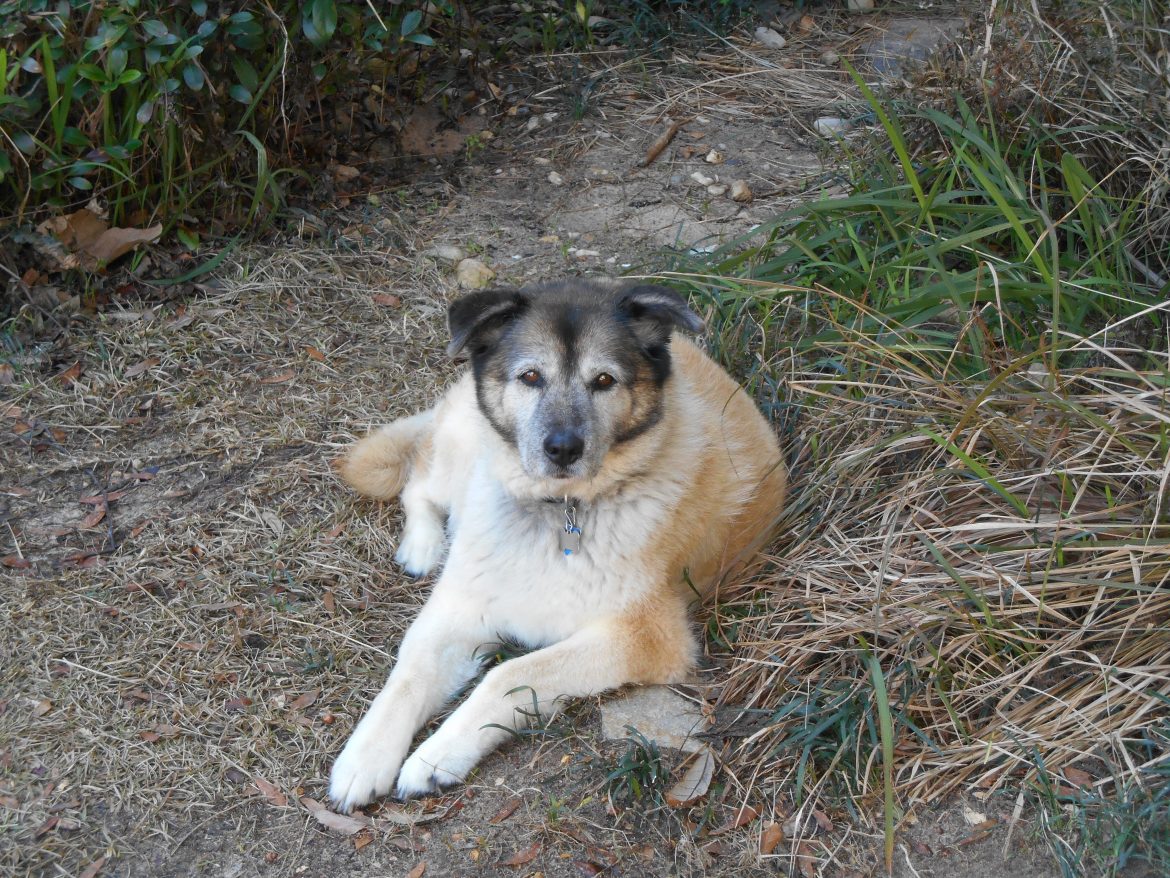 Nikita, our dog, lay unbothered near the driveway despite passing dogs barking and straining at their leashes. Neighbors exclaimed their amazement at her loyalty. Even on our walks to the park three blocks down the street, she trotted beside us. Every few yards she looked up and synced with our pace.

Thunder and fireworks were the only forces that could compel her to cross an invisible fence and leave the confines of our yard. Then, we would have to scour the neighborhood streets looking for a shivering, panicky dog. If I found her near the house, rather than loading wet dog fur in the backseat, I’d tell her, “Go home, Nikita.”

Sometimes, I would be home, and she would still dash out the dog door when thunder rumbled in the distance. I’d chase her down. “Go home, Nikita.”

We met many kind-hearted people who loaded her in their car and called our number on her tag. Nikita enjoyed sitting on the couch eating popcorn with one gal as they watched a movie. Nikita hesitated leaving the forbidden treats when we came to retrieve her.

“C’mon, Nikita. Let’s go home. You don’t belong here. You belong with us.”

Her leaving dumbfounded me. Why did she take off when home was her safest bet and we loved her so much? Why did she search for people or open car doors that offered refuge, when she already had it in our cozy, well-built house and with me stroking and murmuring to her?

On rare occasions when the fence was broken, she would noodle around the garbage can set near the street for pickup. She would follow a meandering scent left in the jasmine along the street. I’d round the corner and see her sniffing at the curb 15 feet from the driveway. “Come home, Nikita.”

This phrase echoed in my mind last week as I worked through a study on abiding in Christ. When I am “home,” abiding in Jesus, evidence surfaces. I spy a woman sitting alone in church, and I sit beside her rather than staying in my cocoon. When my husband forgets an event that I remember telling him twice, I swallow a retort and tell about it as though for the first time.

When I choose to sit aloof from a lonely woman and run away to the security of empty chairs, I can be sure that I am not abiding in Christ. “Go home, Suzy.”

When I roll my eyes and remind my husband that I told him about the event not once, but twice, then I know that I have wandered from Jesus. “Go home, Suzy.”

Reminding myself that my heavenly Father loves me as I am, sends me back home where I belong. I feel his solid warm hand wrapped around mine, and I am energized to step out of my self-protective bubble.

John 4:16 So we have come to know and to believe the love that God has for us. God is love, and whoever abides in love abides in God, and God abides in him.”

Reverend Paul Miller used to liken forgetting God’s love as living as orphans. Orphans must look out for themselves, scrabbling for food, defending scraps, and hiding from dangers.

I am not an orphan, but when I do not dwell with Christ, I live like one. I am fearful, defensive, and self-consumed. I am like Nikita running for safety, provision and love when she had it all the while.

When I remain connected to God’s overwhelming love, his love spurs me to seek orphans to bring home.

Remember the prodigal son who asked for his inheritance then turned his back on his father and left? He came to his senses when his belly was empty and stinky filth covered him. He turned toward home.

He headed in the right direction, but he still didn’t realize how much his father loved him.

Luke 15:21 And the son said to him, ‘Father, I have sinned against heaven and before you. I am no longer worthy to be called your son.”

He hoped to be allowed near, but his father did more than that, he welcomed the prodigal into the house.

Luke 15:22-24 But the father said to his servants, ‘Bring quickly the best robe, and put it on him, and put a ring on his hand, and shoes on his feet. And bring the fattened calf and kill it, and let us eat and celebrate. For this my son was dead, and is alive again; he was lost, and is found.’ And they began to celebrate.”

The son’s leaving home did not change his identity. His father called him son, because the son still belonged in the family.

Stop and think. Are you wandering around in anxiety, afraid of thunder on the horizon? What are you afraid of that is driving that anxiety?

There is only one place that is able to give lasting peace and belonging. Go home where perfect love from your heavenly father awaits.

I John 4:18 There is no fear in love, but perfect love casts out fear.”

Oh Suzy, what a wonderful reminder to a wandering sheep!

Thank GOD we don’t wander long before He finds us and brings us home.

Your story about Nikita is a wonderful reminder that I will always have a home, no matter what storm passes through my life. When I am in Jesus I desire nothing else and I am filled by gratitude.
Thank you, Suzy. GO HOME. May I remember those powerful two words forever!

May I remember those powerful two words forever!

You don’t know how many times I’ve repeated those words to myself since writing this essay several weeks ago.
” Prone to wander, Lord, I feel it. Prone to leave the God I love. Take my heart, O, take and seal it. Seal it for Thy courts above.”