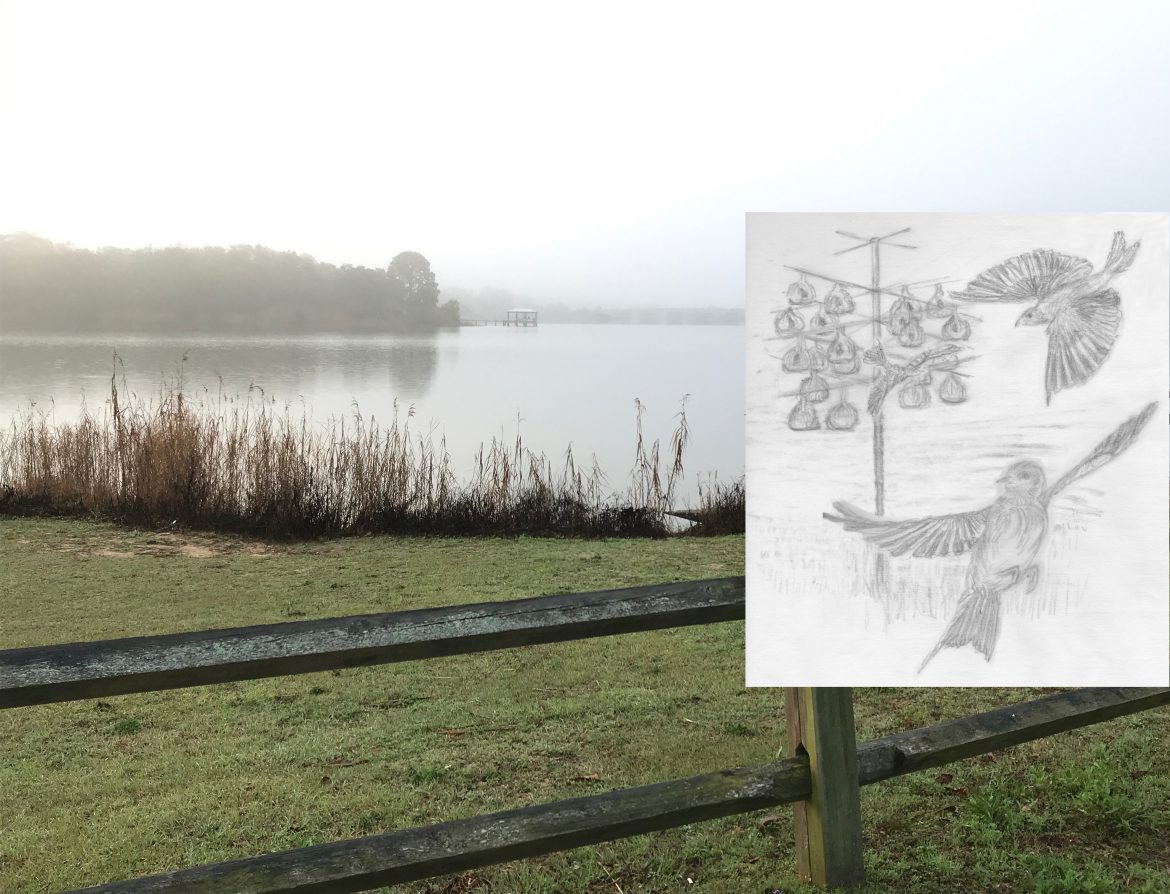 LORD of Birds and Questions

On my morning walk in the neighborhood, I head south on Oceola Avenue and the sun burns like a campfire on my left cheek. The low elevation of this street prevents development on three contiguous lots, so grasses sweep down from the road to the bayou, framing an inspiring view. This, and the thriving wildlife, draw me to this route.

Mullet leap into the air, then slap the water in a side-flop. Often these fish jump two or three times in a line, like a skipping rock. Elsewhere, pelicans bob alone on their waterbeds or fly in squadrons inches above the water and at tree height. Their oversized-heads with long, pointed beaks and bent wings make me imagine them to be pterodactyls. Reinforcing this idea, an osprey, gliding in lazy circles, whistles to his mate, a perfect mimic of a cartoon pterodactyl cry.

Once I saw a beaver plowing the water followed by a v-wake. Three times I’ve watched dolphin curve out of the water over imaginary hurdles, but if they emerge from the molten waters today, I probably won’t see them.

Today, competing memories and speculations spark in my head, thoughts of my father and his decline, his death, and questions that follow, and follow, and will keep following me.

Shade from sporadic trees shelter splotches on the street. Entering one of these refuges, I am instantly shielded from the sun’s blaze. My pace slows to prolong the reprieve. Air rising from the heated pavement wafts against my legs, followed by a breeze off the water, reminding me of a river’s threading warm and cold currents.

A swooping bird zooms ahead.

Purple martins occupy bird-apartments on this street. Bloated gourds hang from arms which extend from a pole, much like an old fashioned circular clothesline. Surely the zooming bird is a purple martin, but this one’s feathers are darker, nearing black. Starling? No, longer body and forked tail.

Another shoots past as I re-enter the scorching light. I pause and squint to watch their flight. Purple martins, indeed. I can tell by their darting dives aborted by unpredictable changes in course. They swim through the humid air snatching mosquitoes in mid-flight. Passing each other in swoops, criss-crossing and circling, they’re like care-free children running with arms wide. I marvel at these lives, with brains smaller than an acorn, and at the exercise of their wills.

Six or seven martins tighten closer overhead like an infant’s spinning mobile. Their feathers modulate from black, with a bold streak of reflected sunlight, to deep purple, subtle enough to question. Soaring, then curling, they tighten further, then dip lower and lower until I’m the center of a carousel of birds, like Snow White. A sphere of creatures, performing a display as expressive and beautiful as a ballet, encases me.

With gaping mouth, I’m filled with wonder. Why do the birds surround me? Aren’t they afraid? How can they, who survive by eating other life, do so with such elegance and magic? How do they not collide with each other in their mad dashes? Reason fails me, but awe trumps my riddles.

A cloud drifts overhead, spreading its protective cloak across the neighborhood. The birds dissipate, and the spell is broken.

I have been given a rare gift which speaks my language, one of those tangible evidences of an invisible grace. In answer to my questions, God poses His own, as He did to Job. I puzzle over the birds. Their dances sketch, with clumsy lines, glimpses of God’s dominion, His beauty, His genius, and His ineffability. I choose to imagine the bird-cocoon as God’s embrace, variable, but not fickle.

The fever of questions concerning Dad refine and cool. I don’t forget him, but he lies back down in my mind. I carry the gift of the birds’s astonishing behavior, ready to cast over questions of Dad when they reignite. I don’t have to own answers to every question, but I need reassurance that someone else does, Someone that cares about me.

The memory may not be sufficient to douse the next flare, but for now, it is more than enough.