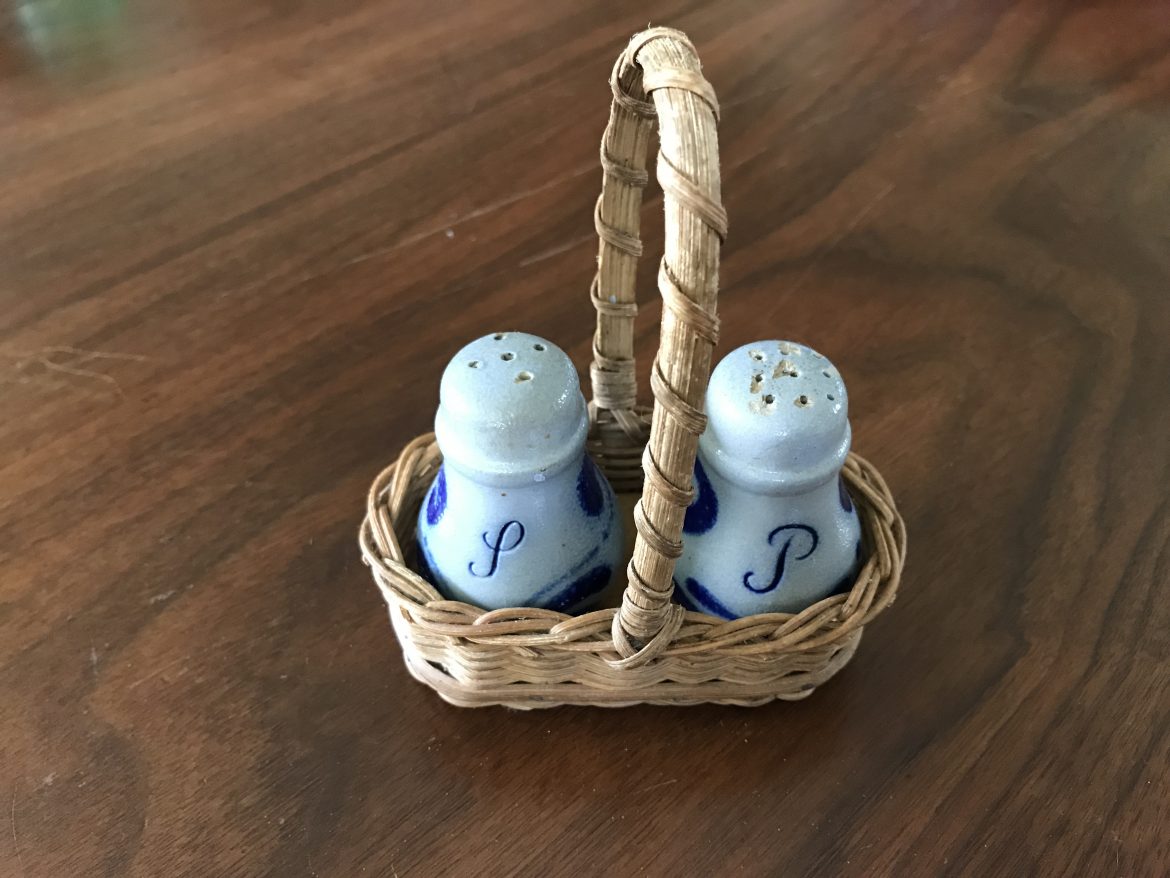 Dad picked up the salt shaker and tipped it over his tea.

He continued with the salt, and few crystals began spilling into his glass. I put my hand over his and guided the salt shaker over his plate. His eyes slowly tracked our hands, but he seemed as if he had not heard me. Salt rained onto his plate, and I gently took the shaker and set it next to the pepper.

He hunched over the table with his wrists leaning on the oak’s worn edge and drifted out of my presence.

My father, the man to whom people came to unload their minds and hearts for advice, the paternal authority, the spiritual mentor, the business strategist with a Mensa calibre brain, was succumbing to Parkinson’s dementia.

The next morning when I came down to make breakfast, he sat with his Rotary mug of coffee sorting mail and balancing his checkbook without a calculator.

“Am I? I don’t remember yesterday.”

“Nothing to remember. I’ll cook us some breakfast.”

Divergent scenarios, like these, played out for several months. At first, it were as if he were driving but needed me to take the wheel for a few seconds.

Mother died just four months before, and now her oncologist diagnosed Dad with cancer. My brother and his wife stayed with Dad on weekends. My sister made the same trip to run errands  on Thursdays. Every six weeks, I flew for a week to give my siblings a break.

Dad began using a walker to push through the rooms in the house and up and back his block outside when the day’s heat subsided. Watching him lean on the device comforted me that he’d be less likely to fall but unsettled me to witness him connected to a contraption for feeble people.

As weeks passed, Dad needed our hands on “the wheel” for longer periods of time, and often to completely trade places with him. I checked out all the books from the library on Parkinson’s disease to understand his symptoms and how to care for him.

The 28 compartment doors in his pill container lay open like mouths waiting to be fed. I unscrewed each medication in turn, and shook out handfuls, dropping a yellow pill in each mini-box, a rice-sized blue in each day’s fourth box, and continued until a week’s worth of dosing awaited.

“Dad, it’s time for your pills.” I tumbled one compartment’s medication into his palm and held his iced tea. “Here’s the straw.”

I drove my father to his doctor’s appointments and took notes.

“It’s common for gray-hairs like us to become dehydrated, which can cause bladder infections and temporary dementia,” Dad’s doctor instructed. “Push the fluids.”

I coaxed Dad to drink his favorite sparkling water. “Let’s have some more crazy water, Dad,”

I don’t have a medical education, but my father needed unskilled medical care. The nurse demonstrated how to give fluids through Dad’s peg tube and how to flush it. I pushed past aversion and fear of erring, and did what needed to be done.

The transition of roles, like my father’s demise, was a downward slanting jagged graph, until one day I realized that I had dropped below the x-axis and felt more like a parent than a daughter. I became the daughter-care giver to the man who had always cared for me.

Dad quit dressing out of his bathrobe and quit shuffling the yards on his short block. We brought in a hospital bed. My brother hired around the clock care givers. Wanting to deny it but recognizing our responsibility, my siblings and I took the wheel permanently. The dance of our relationship with our parent had reversed. He led since our births. Now we had to lead without stepping on his toes.

Dad never became indignant when I woke him to cleanse his wound or help him out of bed to take his vital signs. He was silent and compliant, minimizing my awkwardness when helping him in the restroom. I recognized the Herculean, or rather Jesus-an, effort it took for him to endure every kind of humiliation without lashing at his helpers.

Care giving for my waning knight drained my center of well-being. Dinner time rolled around, and I wrestled a skillet from the stacks of pots and pans in the drawer below the stove. Mother’s fingerprints on the skillet handle were invisible, but they were there. My hands wrapped around them.

Mom, I miss you. Do you see what’s happening to Dad? I need you here to talk with me.

I fought the urge to drop to the kitchen floor and tell God that losing them both was too much. I wrote in my prayer journal. What is held so tightly must be released, even when the next handhold is not visible or isn’t there. Only You can satisfy. I must surrender to Your will what is contrary to my own. Only then will I experience peace that passes understanding. What blissful, releasing freeing peace that is!

Though Dad beat his cancer, my siblings and my efforts did not overcome his depression from losing Mom. Grief, Parkinson’s, and chemotherapy overburdened his will to live.

Each of us kids did what we could. Balancing Dad’s care with the needs of our families was as tricky as instructing Dad to open his mouth for a spoonful of eggs while respecting him. Our lives went on hold.

I neglected friendships and asked to be taken off nursery duty at church. Priorities rose to the top, and the rest floated downriver, as illustrated in my journal. My soul is in disarray like my house. Every room is cluttered with items that don’t belong in the house, are out of place, or need attention. I’m so disgusted  and ashamed of myself. I am negative, irritable, bossy, selfish, not at peace, and could go on and on. I must resolve not to care about a dirty house, bland meals, old age, tight budget, and continued school. I feel incapable of improving. I don’t know where or how to start. All I know to do, is to just carry on. I know I am acceptable right this moment, as I am, because of Jesus.

I started making airhead mistakes. I booked a flight leaving from the wrong airport. I locked my keys in the car. I charged from kitchen to bedroom to bathroom, looking for my phone while clutching it in my hand.

I couldn’t stomach fiction or listening to music. Made-up drama and tinny refrains contrasted with the real life drama of an emptying life.

My siblings and I sacrificed and made mistakes as we attempted to reverse a measure of our father’s parenting, but I don’t regret the hours at the oak table discussing culture, family history and theology with Dad. I don’t regret the disturbing opportunities for giving back to this dear man that I miss so much.

I’m relieved that this era of my life is behind me, but both happy and unpleasant memories never fully evaporate. I hope I learned from my experience and will be as gracious to my children as Dad was to us.

I need to start practicing now.

This touched me deeply, Suzy. Thank you for putting into words so many of the feelings and similar scenes from the short few months (4) after my dad became sick until he died. Numerous trips to South Dakota to help care for him to give my siblings and mom a break. Stupid mistakes. Leaving my husband and kids and house for extended periods. But I don’t regret for a moment how it all played out and how faithful God was through it all. Thank you!!

Thank you, Deb, for telling of your similar experience. It’s a lonely and confusing time, but hopefully when our sisters read that others have made their way through the forest, they’ll find their way out too.

How beautiful this story is of your walk with your Dad. Even clutching on to the great memories he left behind. Thank you for sharing. Because I feel myself moving into this stage of life with my own parents. And of course, wondering how are we going to manage this.

Be assured that you will manage it, and manage it well. You’re surrounded by people who love you (including me :-)) who will listen and support you. Most of all, our Father understands us best and is I AM.