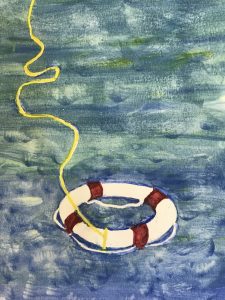 Mother and Father relaxed on the couch reading the Sunday paper. Brother sat on his knees focused on a game board and on his sister, who rolled the dice. The moment the dice landed, she bumped the board, which tumbled the dotted cubes. She grabbed her silver dog and skipped it across the blue squares to the Go space.

Little brother launched into his sister to defend his honor, angry at his sister’s suspected scheme. Ducking and attacking, they flew at each other with fists and fingernails whirling.

The sibling’s fight alarmed their mother. She dropped the Dining section. “Stop them,” she said to the children’s father. “One or both of them are going to get hurt.”

“No,” said the kids’ dad, lowering the front page. “Let them duke it out for themselves. I want to see this.”

Mother looked askance at Dad. The two kids pounding each other slowed their blows, and Father quickly raised the paper. Sister glanced at dad. Brother peeked at his father too, but the paper hid Dad’s face. The room grew quiet.

“I don’t want to play this game anymore,” declared the boy. “Let’s play the one with marbles.”

“Yeah. This is a boring game,” his sister agreed. “I’ll put this one in its box, and you go get the other one.”

As the kids set up the new game, sister mumbled, “I might have accidentally knocked the dice.”

Without looking up, brother replied, “I was tired of that game anyway.”

Mother lifted her paper, shook it out and shared a look with Father.

The kids, after accepting their father’s refusal to get involved, figured the game wasn’t worth getting beat up over. Though they wanted justice, they worked out their grievances and carried on. They were learning relational skills.

Like the kids, I experience situations in which I expect God’s life line, but He seems to ignore my plight. I demand, “Why don’t You correct this situation?  I want to do Your will, please tell me what to do. How could you let this happen, if You love me?” but He leaves me to sink or swim.

I admit that His silence can make me feel abandoned and angry, but if I sit back and calm down, I see that God is actually loving me like a wise parent. If He were to give me instructions for every move I make, I would never grow into a person capable of making confident decisions.  If He fixed all of my problems, I would not be able to work my way through similar situations in the future or help others confronting like positions. I would expect Him to right my world every time something went sideways and would stamp my foot with resentment or hurt, if He forced me to learn how to swim. He allows me to suffer so that I can become a whole person. Tough times may challenge me to the brink of doubt where my faith is tested beyond my perceived ability to handle, but testing strengthens my faith and matures me.

Thankfully, God doesn’t always leave me floundering, and He never actually leaves. He knows me inside and out, when to throw me a life-saving ring and when to let me struggle. He decides, based on my best, not on what’s most comfortable for me or Him.

Consider it pure joy, my brothers, whenever you face trials of many kinds, because you know that the testing of your faith develops perseverance. Perseverance must finish its work so that you may be mature and complete, not lacking anything. James 1:2-4 (NIV)

…you rejoice, though now for a little while, if necessary, you have been grieved by various trials, so that the tested genuineness of your faith—more precious than gold that perishes though it is tested by fire—may be found to result in praise and glory and honor at the revelation of Jesus Christ. 1 Peter 1: 6 (ESV)

Thank you for reminding me of that truth. Sometimes we get caught up in our worries and forget the truths of God.

Thank you, Suzy, for this wisdom and encouragement to be patient and to trust in God’s timing❤️

Thank you, Vera. Sometimes long movements of time are part of the lesson.