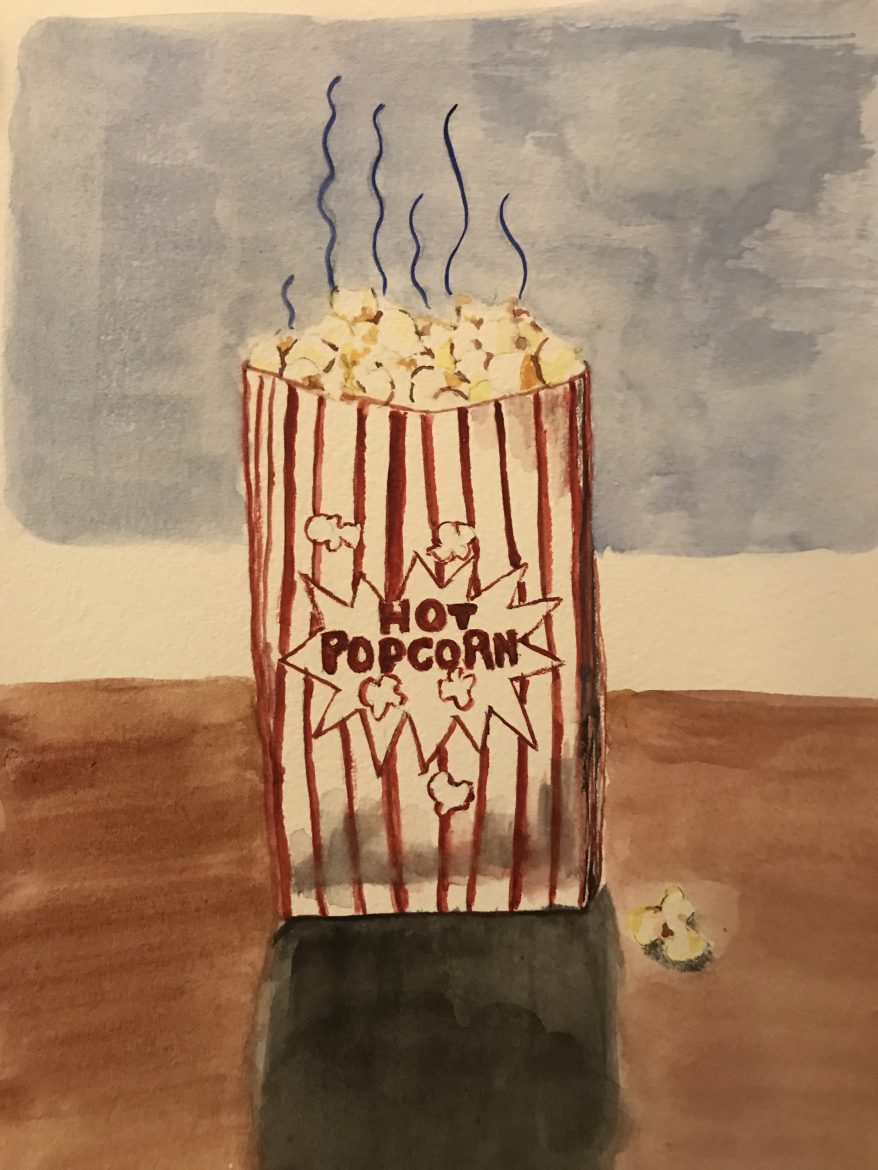 Buttered popcorn permeates the air as twelve of us take our seats in our neighbor’s garage. He fiddles with his computer until the film fills a sheet-sized screen and a musical prelude sings. We’re watching The Chosen, a video adaption of the Gospels.

I can see why some might not feel comfortable with imagined backstories added to the Bible narrative, but sermons, devotionals, and music are all forms of interpretation. The movie fleshes out characters and situations with plausible scenarios which are not described in scripture but don’t contradict it.

For example, we read in the Bible that Jesus delivered Mary Magdalene from demons and that she anointed and followed Him. Scripture does not describe her exorcism, but the movie presents a believable scene of her deliverance and of Jesus calling her. The backstory captures Jesus’ omniscience and omnipotence as well as His tender, compassionate love. He calls Mary by name and reaches out to her when her life is decaying. His words convey His deeply intimate knowledge of her despair and His overwhelming forgiveness. I witness Mary’s transformation.

Watching this scene of Mary’s calling squeezes my heart and leads me to think He knows me this well too. He knows my secret names given me and those I assign to myself. He calls the true me with such kindness and yet authority. As Mary says in the film, “I was one way, and now I’m completely different. And the thing that happened in between was Him.” I say the same about my life.

The series awakens my awareness of Jesus’ love for me and my response to Him when I see emotions cross his face, his humor, his piercing love, his limping exhaustion, his looking up at the night sky to pray with his father. The series brings to life the Biblical stories I read. Still, I know that the actor is not Jesus. His photo appears in other projects online. He is only a fallible person like the rest of us, but the show makes me consider the real Jesus and sends me to the scriptures to clarify and verify. Others who watch it may also creak open their Bibles to do the same.

The real Jesus is better than the movie. The real Jesus doesn’t live on a flat screen and leave when the credits scroll. The real Jesus gives me tangible clues that He lives and is present as I travel back home, sleep, and begin the next day. I talk with Jesus as the dog and I tramp our neighborhood. We discuss the relaxed bayou waters after last night’s storm. I imagine Him remarking on the coolness of the morning and birdsong greeting the washed landscape. I admit that it’s not the same as His smothering me in a hug, but this is faith’s job. I love Him by believing in Him without hearing His human laugh or feeling His hand on mine.

The film has helped me see Jesus from many angles, and I am grateful that watching it stirs love. Love sets Christianity apart from other beliefs. The Lord God came to earth out of love to show us His identity and to buy our forgiveness with His life. We don’t earn His love, we receive it, and it changes us.

I don’t love the Jesus on the screen, though his acting helps me deepen my love for the real Jesus. God uses all kinds of methods to reach my dull heart. The movie is one of many.

“but this is faith’s job”… I love that line! Great post!!

Thank you, Linda, for your faithful encouragement. The works of God are to believe. John 6:29

Beautifully written, Suzy! I know exactly how you feel about Jesus. I have a number of Christian movies that I periodically watch and I can almost feel Jesus sitting beside me because of the loving & warm feeling I have when I watch them. I feel him close by when I watch nature wake up each day. For me, there is no better feeling than knowing God lives in me and intimately knows my heart mind and soul. I look forward to one day watch the movie, “The Chosen”. Thank you so very much for inspiring me with your beautiful thoughts & words. Much love to you!!

Thank you, Kathy. Please let tell me what you think of the series after you get a chance to watch it. God is so gracious to give us so many avenues to grow our relationship with Him.

this is well written and such a great sharing of how this film shows Jesus as human and compassionate. I have found that it makes my prayer time more focused, but also I am grateful that this is a great tool to share with non-believers. a soft way to evangelize for those of us , who find it hard to reach those who do not know the love of Christ.

Felicia, you make a great point. Thanks for the idea. Dan pointed out that the series received a 100 on Rotten Tomatoes, an endorsement no matter one’s beliefs.

“We don’t earn His love, we receive it, and it changes us. “. I am learning the full truth of receiving. It’s not always easy but so necessary and impactful and transforming. Receiving is not passive.

Receiving is often the harder road, but earning cannot change us in a lasting way. Earning can only bring faux, external change.Keep drinking it in, sister!